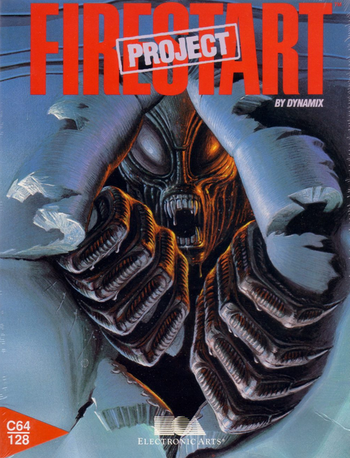 Developed by Dynamix and published by Electronic Arts for the Commodore 64 in 1989, Project Firestart is one of the earliest examples of the Survival Horror genre.
Advertisement:

On September 12, 2061, the System Science Foundation loses contact with the research vessel Prometheus, which is in orbit near Saturn's moon Titan. The SSF sends agent Jon Hawking to investigate, warning him of the genetic experiment that has been taking place on the ship. Almost immediately after docking at the Prometheus, Jon finds his first hint at the nature of the incident: a dismembered crew member next to the word "DANGER" scrawled in blood.

Jon's primary objectives are to recover the science log for the experiment (the eponymous "Project Firestart") and set the Prometheus to self-destruct, in order to curb whatever disaster the experiment has caused. However, occasional cutscenes interspersed through gameplay clue the player in to other happenings on the ship, all of which serve to complicate the situation in one way or another.