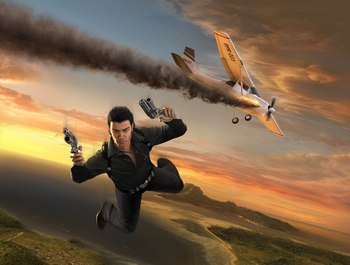 Just Cause takes place on the (fictional) Caribbean island of San Esperito. The player can drive nearly every vehicle under the sun, as well as climb about on them while moving at high speeds and jumping onto other nearby cars, trucks, tanks, helicopters, etc. Notable for the inclusion of a grappling hook, which allows Rico to rappel onto moving vehicles from a distance, and a parachute, which allows for all manner of aerial stunts.