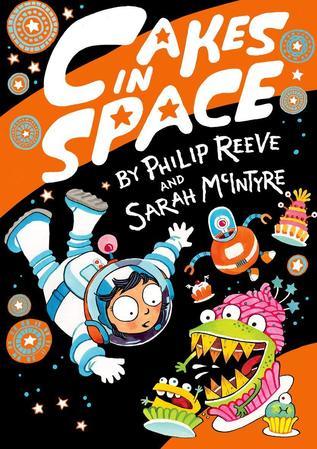 Cakes In Space is a Children's Book by Philip Reeve and Sarah McIntyre, the first of their Not So Impossible Tales series.

Astra is a little girl who's family is moving... to a whole new planet. Said planet will take 200 years to reach, so they're all going into hyper-sleep until the journey is over. Before she and everyone else do that, though, Astra decides she'd like a nice dessert. So she asks the food replicator aboard the ship, named Nom-O-Tron, to make her one. Not just any old dessert, though. Astra would like the ultimate dessert. So, the replicator complies.

Some years later, Astra is awoken from her hyper-sleep a year early, and makes a startling discovery. The ship has veered off course because sentient cake monsters have infested it. It seems that Nom-O-Tron has been spending the last one hundred ninety nine years trying to fulfill Astra's request to make the ultimate dessert, something scarily delicious, and also brilliant, and has been churning out living, and hostile, desserts as a result.

Now, with the help of a ship's robot caretaker, Pilbeam, Astra must save the ship from the cakes, get the ship back on course, and if that weren't enough, deal with alien looters called Poglites who've come on board to take all the ship's spoons.

Cakes In Space contains examples of: