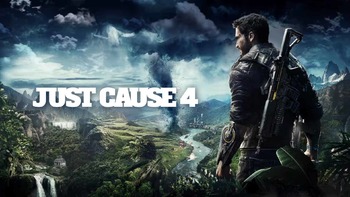 Bring The Thunder
"You don't know anything about fear. We grow up with it, that's how life is here. Knowing that everything you love could be ripped away in an instant. But one day, I decided that I would never live in fear again. That's what makes you dangerous, Rico. You are just like me."
—Gabriela Morales
Advertisement:

Just Cause 4 is an open world action-adventure video game developed by Avalanche Studios and published by Square Enix. The game was initially leaked on Steam before being officially announced at E3 2018.

In this game, Rico Rodriguez is now in the fictional South American country of Solis taking down yet another dictator, but his main focus is against the Black Hand, who've been regular enemies of his since his time in San Esperito, and more recently in Medici.