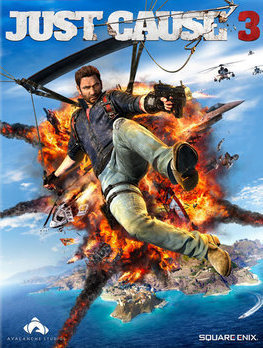 Set the world on fire.
"The town of Costa Del Porto... burn it! And when he comes to protect the insignificant? Kill his friends!"
—General Di Ravello
Advertisement:

Just Cause 3 is an open world action-adventure video game developed by Avalanche Studios and published by Square Enix. It was announced on November 11, 2014. It is the third game in the Just Cause series and is the sequel to the 2010 video game Just Cause 2. It was released on December 1, 2015 for Microsoft Windows, PS4 and Xbox One.

The game is set several years after the events of Just Cause 2. Protagonist Rico Rodriguez leaves the clandestine group known as the 'Agency' and returns to his homeland of Medici, a fictional Mediterranean island, for peace and quiet. Unfortunately, he finds out that the island is under the control of cruel lunatic General Di Ravello, and the madman has set his eyes on world domination. Wanting to stop him, Rico groups up with the rebels that have been combating him, and goes on yet another chaotic journey to destroy the tyrant's evil plans.

Volumetric terrain has increased to allow more verticality, as well as landmarks like caves and tunnels. The world of the game is composed of five major biomes, with each having unique landmarks and landscapes. In addition to the grappling hook and parachute, a wingsuit has been added to the game which adds gliding. Creativity and destruction are also emphasized in the game, with almost everything in the game able to be destroyed in a variety of ways. The previous game's Black Market has been replaced by Rebel Drop, which allows the player to have the rebels airdrop multiple weapons and/or a vehicle all at once for free, as long as they have a beacon to call in the resupply with.

Despite the multiplayer mod of Just Cause 2 being well-received by players, the game only featured asynchronous multiplayer at launch, in which challenges and leaderboards will be included instead of any co-operative or competitive multiplayer mode, as the studio wanted to focus their manpower, time and resources in creating the world of the game. However, after getting approval from both Square Enix and Avalanche Studios, the same team that made the JC2 multiplayer mod has also released a multiplayer mod for this game.

As Isaac Newton once said, "There's no better way to break a fall than by grappling to the ground and reeling in to it."
Feedback