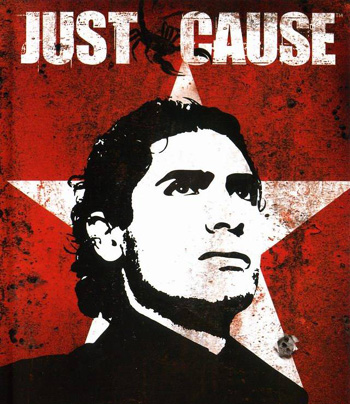 The game's cover helpfully tells you why you can leap eighty feet in the air from the back of a motorbike.
"I can't believe I get paid for this!"
—Rico Rodriguez
Advertisement:

Just Cause is a series of military sandbox games developed by Avalanche Studios. They focus on the exploits of Rico Rodriguez, an action hero implied to be working for the CIA to overthrow fictitious Banana Republics. The traversal with the grappling hook/parachute/wingsuit combo is what really makes the Just Cause games stick out among their peers.

Rumor has it that a movie adaptation, titled Just Cause: Scorpion Rising is in production.

Elements which apply to all games