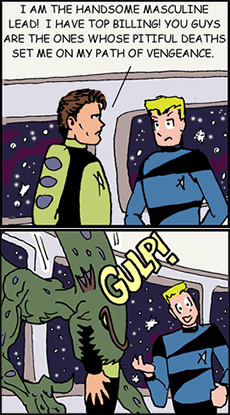 As it turned out, he was less of a main character, and more of a main course.
"Kids, sometimes you think you're living out one story, but the truth turns out to be something else entirely. At the time, I thought the story was about whether Robin should be at the wedding. If only I'd understood what the real story was."
— Ted narrating in hindsight, How I Met Your Mother, "Shelter Island"
Advertisement:

Sometimes, you can take being Genre Savvy too far, and wind up having as much Genre Blindness as the poor idiots who split up in a haunted house where one of you is a murderer.

If a character in a series that has a Fourth Wall thinks mainly in terms of tropes, you've probably got a character who's Wrong Genre Savvy. Even if you're correct about being in a story, it's possible for you to guess wrong about your role in the story, the genre of the story, or where on the various sliding scales your story is. Any way you spin it, it's still a common way of subverting Genre Savviness.

This can be a minefield. Say a stranger turns up on your doorstep; if he's a vampire, he can't hurt you unless you invite him in, but if he's an Angel Unaware or King Incognito, you might damn yourself by turning him away. And look at it from the visitor's point of view; if you're an honourable fairytale knight, you won't lay a finger on anyone who's eaten your food, but if you're one of The Fair Folk, eating your food will trap him there forever. What's a Genre Savvy guy to do?

This can also be used for deconstructing character types, by placing a generic character in a realistic setting and exploring what happens when they act as if they are in a work of a particular genre.

See Heroic Wannabe, Wide-Eyed Idealist, Grumpy Bear, Black-and-White Insanity, Prince Charming Wannabe, and Lord Error-Prone for characters with this trait and Genre Savvy and its downplayed cousin Functional Genre Savvy for when characters get it right. Death by Genre Savviness is a related trope. See also This Is Reality, Hero of Another Story, Entertainingly Wrong, Thinks Like a Romance Novel. Wrong Assumption overlaps with a lot of these. May be confused with Too Dumb to Live.

Upon encountering an army of skeletons in the cemetery, Mr. Krabs begins to panic thinking that he's going to be Devoured by the Horde, but Smitty Werbenjagermanjensen makes it absolutely clear that they're just there to help him get his hat back from Krabs.

Upon encountering an army of skeletons in the cemetery, Mr. Krabs begins to panic thinking that he's going to be Devoured by the Horde, but Smitty Werbenjagermanjensen makes it absolutely clear that they're just there to help him get his hat back from Krabs.