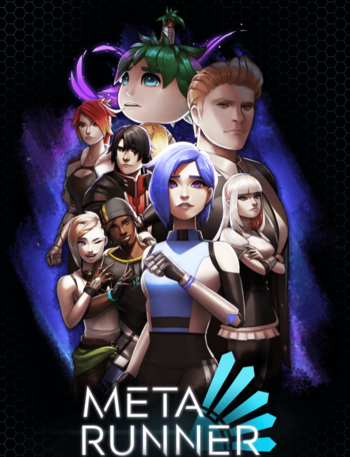 ♫ I'm always running... ♫note Counterclockwise from center, the main cast of Season 2: Tari, Evelyn, Lucks, Theo, Belle, Masa, Sofia, and Lamar. At the top, Lucinia's conciousness can be seen. Not pictured: Dr. Sheridan.
"Video games are everything! Jobs, entertainment, lifestyle, it's the engine that powers society itself, and to make it in this society, you need to win...a lot. Be it in FPS games, platformers, battle royales, you name it. There are gamers who train every waking moment of their life in hopes of becoming the best. And at the top of the food chain, you have Meta Runners. People who are willing to replace their limbs just for a boost in accuracy, dexterity, and performance. With legions of fans who adore them, Meta Runners are the best of the best. That is, until the world sees what I have planned. Until the world sees you... Tari."
— Dr. Sheridan, "Wrong Warp"
Advertisement:

Meta Runner is a CG animated web series created by Kevin and Luke Lerdwichagul (the latter better known as SMG4) and the first fully-animated series made by their studio, Glitch Productions. The series takes place in Silica City, a society centered around video games where "Meta Runners"—individuals who've replaced their arms with machines to boost their gaming performance—dominate the competitive scene. At the center of the story is Tari, an amnesiac girl with a Meta Runner arm of her own, who discovers she has the odd ability to enter the games she plays, allowing her to master them in ways unparalleled by other Meta Runners.

However, Derek Lucks, the head of local megacorporation TASCorp, has his own plans for Tari and her abilities, especially after he sees her pull a game character—Theo, the protagonist of the platform game Ultra Jump Mania—into the real world. On the run from Lucks and his top Meta Runner Belle Fontiere, Tari and Theo soon find themselves tangled up in the affairs of MD-5, a trio out to expose TASCorp's corrupt practices. With nowhere else to go, Tari ends up joining MD-5 in their mission to take down Lucks...and possibly discover who—or what—she really is...

Tari is notable for making an Early-Bird Cameo in the main SMG4 series as a member of the main cast, albeit a more cartoonish version of herself who is bad at everything except video games. Belle was similarly ported over to the series in 2020.

The first season premiered on the SMG4 channel, staring on July 25, 2019, and ending on October 10, 2019. A Compilation Movie of the first season, Meta Runner New Game+, released on the newly launched standalone Glitch Productions channel on August 28, 2020 as part of the run-up to the second season. Season 2 was announced to be in development upon the Season 1 finale's release, premiering on the Glitch channel on October 16, 2020 and concluding on December 18, 2020. A third and final season was announced to be in development midway through Season 2, and is set to premiere in Summer 2022.

A pilot for a spin-off centered around Theo, titled Ultra Jump Mania, premiered on September 4, 2020.

And there's no time,
Time is always then
I'll be gone when you can see my face and close that open door,
And go.
All the lies,
Lies that it's okay
Sure that you can choose a side but there's no going home,
I know...

The silent reaction from Masa says it all

The silent reaction from Masa says it all