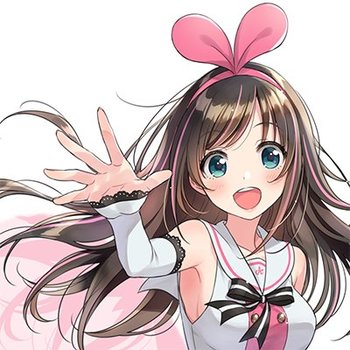 ღ I want to connect with you ღ
"Hi there, Virtual YouTuber Kizuna Ai here!"
Advertisement:

Kizuna AI is the name of a "Virtual YouTuber" (in actuality, the Virtual YouTuber who coined the term) featured in A.I.Channel, and created in MikuMikuDance. Her videos primarily consist of Let's Plays and vlogging, which later expanded into singing cover versions and original songs.

Initially gaining modest fame through her Web Video blogs, her popularity increased significantly after a Let's Play video of her playing INSIDE (2016) was shared on the anime-focused Facebook page IGON.

. Ai-chan's former "clone" co-host, Love-chan, has her own channel here.

*  There was originally an additional 'clone', Aipii, and the channel was called "Love-pii-channel", but Aipii left in July 2020. There's also an official Mandarin spinoff, commonly called Ai-ge, created for her large number of Chinese fans, whose non-PRC channel is here.

Titles Kizuna Ai has played on her gaming channel