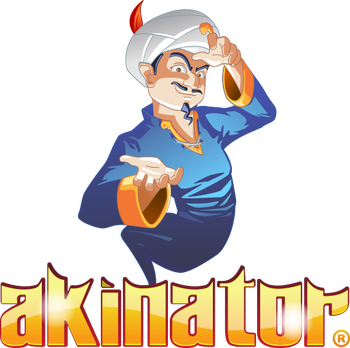 "Great, guessed right one more time!"
"Think about a real or fictional character. I will try to guess who it is."
Advertisement:

is an online Twenty Questions game where you challenge the eponymous genie, Akinator, to guess a character or real-world person you've picked.

It is noted for having a very extensive database of characters and people from even the most niche and obscure works—this is because the database is being constructed by the players; not only they can introduce new characters to Akinator, but he also learns more about the characters as more questions about them are answered.

As a result, it is typical to see "Akinator threads" on various forums which are mostly filled with people being amazed at how ably Akinator can "read their mind".

I think of... these tropes: