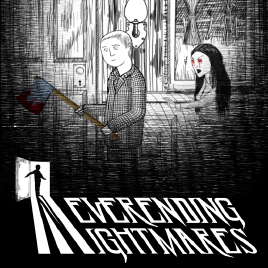 This can't possibly end well for you.
Advertisement:

is an indie Psychological Horror game developed by Infinitap Games

You play as the pajama-clad Thomas, who wakes up from a nightmare, only to find that he is still in a nightmare. He is compelled to explore his dreamworld, but as more and more sinister things start bubbling to the surface, it becomes increasingly apparent that something is terribly wrong with Thomas...

Notable for its deceptively complex Edward Gorey-inspired hand-drawn art style, with dynamic cross-hatched shadows and splashes of color for interactive objects, as well as the many scenes of brutal, unrelentingly gory violence.

The game was inspired by creator Matt Gilgenbach's experiences with obsessive compulsive disorder and depression, which were exacerbated by the financial failure of his previous game, Retro/Grade.

*wakes up in a different TV Tropes page...*