Western Animation / DuckTales the Movie: Treasure of the Lost Lamp 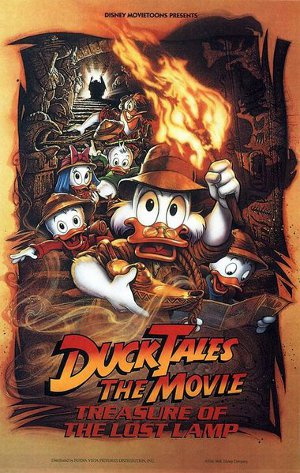 Released in 1990, during the interim between seasons 3 and 4 of DuckTales, DuckTales the Movie: Treasure of the Lost Lamp marked the first theatrical animated movie by The Walt Disney Company that was not part of their animated feature canon (being produced by Walt Disney Animation, France S.A., which would later transfer from Television Animation work to Feature Animation work, and released under the one-time "Disney Movietoons" label), and their first movie based on one of their television shows.

The film opens on Scrooge, Launchpad, Huey, Dewey, Louie, and Webby arriving at a dig site where Scrooge's diggers have found a map to a treasure Scrooge has been seeking for forty years - the treasure of Collie Baba and his 40 Thieves. Unbeknownst to them, Dijon, a digger with a severe case of kleptomania, is working for an evil sorcerer named Merlock, who is also seeking the treasure so that he can get his hands on a magic lamp that Collie Baba stole from him so long ago. Just as Scrooge and company find the treasure, Merlock steals it right from under their beaks. However, before he could do that, Webby found the lamp Merlock was seeking, which Scrooge allowed her to keep as a toy for her tea party set. Thus, Scrooge and company end up coming home with the very thing Merlock was looking for.

Back in Duckburg, the kids discover that the lamp contains a fun-loving genie, who disguises himself as a kid like them and grants their wishes without Scrooge knowing. Scrooge eventually finds out about the genie, and soon wishes for Collie Baba's treasure to be brought to his mansion so that he can finally brag about it to his patrons in the Archaeological Society. Unfortunately, Merlock and Dijon are still on the hunt for the genie, and they know that Scrooge has it...

Though well-received by fans of the series, eventually becoming a minor Cult Classic, it was not a box office success, resulting in plans for other feature adaptations of shows from The Disney Afternoon, including more DuckTales films and a Chip 'n Dale: Rescue Rangers movie, to be scrapped, along with Disney abandoning their MovieToons label after only one movie (only the Goof Troop spinoff, A Goofy Movie, would see a release, but under the main "Walt Disney Pictures" label). Meanwhile, Disney would have more success two years later with a different movie involving a genie who lived in a lamp.

This Disney animated film provides examples of the following tropes: