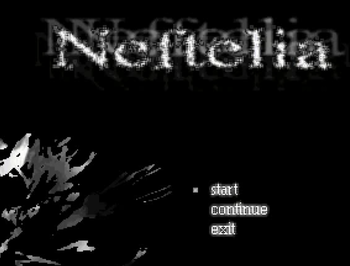 Neftelia is a Freeware Game for PC by the Japanese indie game developer "14". The premise, such as it is, is simple, you are a white, nameless stick figure. You explore the land of Neftelia finding cinematics to complete your chart for no real reason, though the emphasis is more on exploration itself than finding the cinematics specifically. The game seems to take many cues from Yume Nikki and its fangames, so comparisons are inevitable. However, it is perhaps more fair to call the game a Spiritual Successor, or even just "in the same genre" as Yume Nikki than something that took direct inspiration from it. The game also boasts an excellent soundtrack.
Advertisement:

, which contains the base download and the latest patch. Keep in mind the files must be extracted and ran in Japanese mode, so try Applocale for that. Alternatively, download it pre-patched here

- again, extract and run in Japanese mode. The game contains only a few Japanese symbols in it, so English players can understand all the text there is to understand. You will probably also need the RPG Maker 2003 RTP.

Neftelia 2, the sequel, can be found here

. It seems to take place years in the future of Neftelia, where the tone has become somewhat more broken and hostile, and is about the same stick figure collecting 9 rods. 14 has also made several other smaller games and Neftelia-style cinematics starring the same white stick figure, such as 14/?.

Tropes exclusive to the sequel: