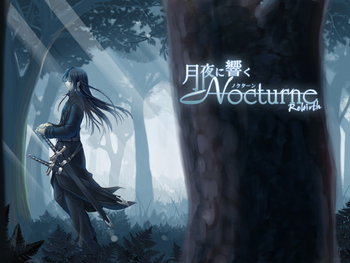 Nocturne is an RPG Maker game made by Cogwheel/Shou and was originally released in Japanese. The original RPG Maker 2000 version was made in 2002 and the Nocturne: Rebirth RPG Maker XP remake was made in 2009 and translated to English by eplipswich in 2015. The remake has nearly the same story as the original, but extended for one more dungeon.

Reviel Von De Russert rescues a village girl, Luna Winston, from a bunch of bandits. Luna, believing Reviel to be her savior, invites him over to her village, Algiz. Unfortunately, she has no idea that Reviel is actually a powerful vampire that plans on killing her and her village. And he's the main playable character.

Not to be confused with Nocturne (1999), a Survival Horror game, or the Shin Megami Tensei game usually called Nocturne for short. It also has no relation to the 2007 French/Spanish animated film Nocturna.

Note: The below tropes apply to the Rebirth remake because only that game was translated.