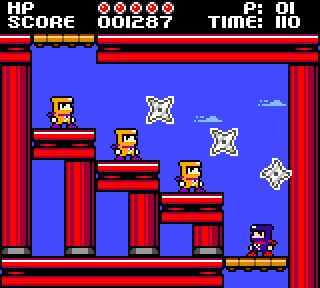 Section 2, just before a Checkpoint. Only 14.5 levels to go. Have fun.
Advertisement:

Kinuhime was killed by a ninja demon! Hayate is obsessed with revenge and goes out to defeat the demon. But can revenge bring her back? Most players never find out.

That is the whole plot of Ninja Senki, an eight-bit freeware platformer game made by the Jonathan Lavigne of the Pixel Tao website, who went on to establish Tribute Games. The game can be downloaded here

. It has 16 stages and is absolutely Nintendo Hard. The player character has five health orbs, which only regenerate once you collect 1000 points: if your health was full, you receive an additional life instead. Falling into various pits instantly subtracts one of your three lives. When all lives run out, you can either quit the game outright or continue from the start of the current stage at the cost of 100 points, subtracted from those you had at the start of the level. Got that? Then go: Katakiuchi Begins!