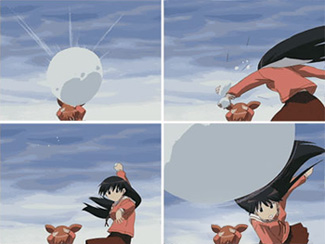 If they throw it back, you can get a good rally going.
"It's all in the reflexes."
— Jack Burton, Big Trouble in Little China
Advertisement:

Well, fiddlesticks. Looks like someone's being attacked with a projectile weapon. It could be Arrows, bullets, or throwing knives, and just to make things worse, the character in question is unarmed. How on Earth can they defend themselves from such a vicious onslaught? Simple, really. Stretch out that hand, grab the weapon that's being hurled, and fling it straight back to the attacker! That'll teach anybody to try and screw around with long range combat.

To understand the Real Life viability of this trope, first, look at Arrow Catch and Bullet Catch. Take the probability of pulling off such a catch, multiply by itself, and that's roughly the chance of this working, at least, as far as launched weapons go. Thrown weapons can vary, depending on size, pointiness, and victim's preparation. Lobbing a ball-sized object at a lacrosse player? Justified. Flinging a shuriken at a naturist? Not as much.

This trope is the concept behind many a Counter-Attack. Compare Attack Reflector, which doesn't bother with the catching part, and Lodged-Blade Recycling, for when said part goes awry. See also Tennis Boss. Grenade Hot Potato is a subtrope if this involves an energy projectile and/or explosives like dynamite or grenades, this may lead to a case of Hoist by Their Own Petard if it kills the attacker who threw it.

Clint Barton catches a live molotov hurled at Kate Bishop's apartment and tosses it back to a Tracksuit Mafia soldier.

Alternative Title(s): Right Back At Ya

Clint Barton catches a live molotov hurled at Kate Bishop's apartment and tosses it back to a Tracksuit Mafia soldier.