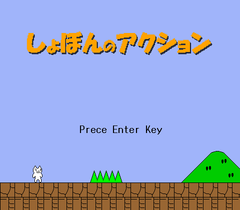 "Billy Mays here! Telling you that you can get negative f***ing two hundred lives in no time flat, and we'll throw in one for free right now! But if you call now, you can fall through the f***ing floor and never be heard from again! Call now! Billy Mays!"
—Azurite Reaction
Advertisement:

Syobon Action (also known as Cat Mario,note Completely unrelated to the real Cat Mario from Super Mario 3D World Neko Mario, Dongs.exe, and Shobon no Akushon) is a Japanese Platform Hell freeware game developed by "Chiku". It basically takes Super Mario Bros. and cranks the difficulty Up to Eleven. It has tons of cruel deaths, from platforms falling immediately when touched, to being shot out of pipes, to the freaking clouds killing you. In addition to having a lot of skill, a player must memorize the only safe way to get through the level and avoid all of the many death traps.

The game is considered very similar in gameplay to I Wanna Be the Guy, but not as brutal on the difficulty. The game has also garnered a number of unofficial sequels, such as Syobon Action 2.

The game has become fairly popular for Let's Players on YouTube because the extreme difficulty of the game causes players to die repeatedly, often causing rage, fails, hilarity, or some combination of those.

You can download or play an official Java-embedded version of the original game here.

After announcement of Adobe no longer supports Flash Player. For those who want to play Syobon action without Adobe Flash

For those interested in playing Syobon Action 2, this page,

as well as Open Syobon Action

includes it in its entirety.

The same lead developer would go on to make Eryi's Action, a Spiritual Successor to this game.