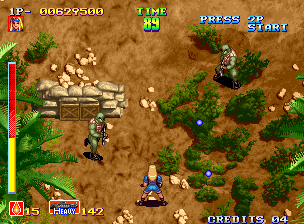 "We must stop D.I.C. They have only 72 hours to accomplish their objectives. The four specialists will exterminate the troops of D.I.C. They will never be defeated."
— Opening Monologue of 2nd Squad.
Advertisement:

Shock Troopers is a Vertical Scrolling run 'n' gun Shoot 'em Up game developed by Saurus and published by SNK for the Neo Geo arcade platform in 1997. A sequel, Shock Troopers: 2nd Squad, came out a year later. A third title was planned but never materialized. The gameplay is similar to games like Commando and Ikari Warriors, and both games feature two-player co-op.

In the first game, a Multinational Team of eight commandos, each with different stats and special weapons, must fight against the evil forces of The Bloody Scorpion Group. Their leader, the fearsome... Leader, has kidnapped Cecilia, the granddaughter of a famous scientist, George, in order to force him to work for them. The player can choose only one of the commandos (and start with more health) or a team of three (and have more combat options) to switch between on the fly. The game has three level routes and you are given the chance to switch from one to another mid-way through the game.

In 2nd Squad, a less-ethnically-diverse (but more diverse in weapons and abilities then the first team) team of four commandos must fight against the evil forces of Dio International Corporation And the shadowy General behind them, who are attempting to Take Over the World. It loses the Tag Team feature but gains more special weapon Power-Ups and adds Metal Slug-style controllable vehicles.

Both games have become available to download on the Wii's Virtual Console, the PlayStation Store for the PS3, PSP and PS4, XBox One and the Nintendo Switch. The first game was also included in SNK Arcade Classics Vol. 1 for the Wii and PS2.