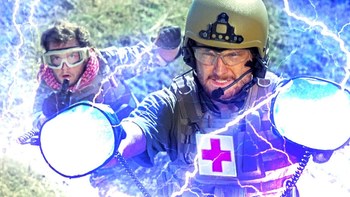 An electrifying tale!
"Witness the destructive power of the defibrillator!"
— YouTube Description
Advertisement:

Shock Troopers is a short, live-action web video created by the special effects team at Corridor Digital. Originally posted to YouTube in 2011, the video depicts a trio of soldiers who must hold and defend their position against a small army. Separated from the third member of their party and out of ammo for their firearms, two soldiers must clear a trench using a rather unconventional weapon: a defibrillator.

Can be watched in its entirety here