The Enemy Weapons Are Better 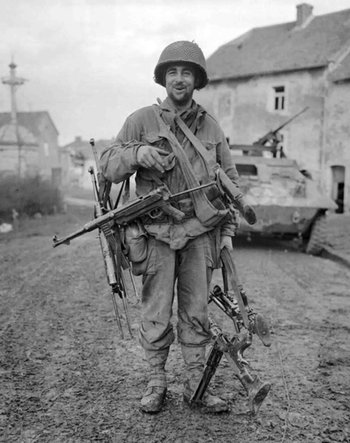 You're in a war zone, you're given your standard gear from your outfit, and then you carry out your mission. However, about a few minutes in, you promptly drop whatever guns you were carrying and grab the enemy's. Now wait, your side just handed you a perfectly good weapon! Why would you abandon the one you just had? Sometimes in video games (most commonly FPS games, in which you grab these weapons fresh off your enemies' cooling corpses) you're more than likely to just stop using the weapons you were issued and begin using anything you can procure on sight. This is usually for two reasons:

This essentially never happens in live-action media; when the hero brings down an enemy with better weaponry, he will usually continue to stick with his own.

For this trope to work however, the character must be able to be sent in fully loaded and then have the option of keeping their own weapons or exchanging them. Usually it's the latter because they find the enemy's weapons are, indeed, better. Related to Offscreen Villain Dark Matter, in which the bad guys get more and better stuff to preserve the Rule of Drama.