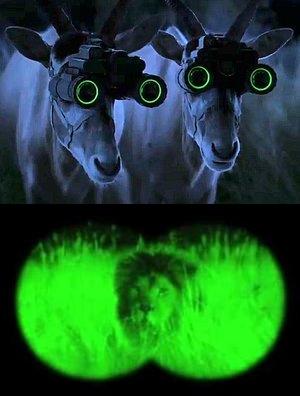 "We can see you, Carl!"
"We can totally see you."
Advertisement:

Night vision goggles on TV and in movies are seldom shown correctly.

Modern night vision goggles merely amplify light from wide spectrum with a CCD-based optical sensor. CCD sensors are however highly sensitive to near-visible infrared radiation. This means that normal night vision binoculars will display "infrared" as if it was visible light, and many of them also have an "infrared" lamp fitted, which produces visible light to the wearer of the glasses, but not to the unaugmented human eye.

The confusion comes from the fact that "infrared" is also the spectral range used by thermal imaging. All objects at temperatures found in the earth's biosphere do produce radiation in the infrared, but not necessarily in the frequency range that CCD sensors are sensitive to. The infrared range regular CCD cameras operate in is "near-visible" — an object at 400°C is glowing brightly to someone who uses a CCD camera, but is still pitch black to the human observer, who would only begin to see a red glow at around 450-500°C.

CCD are useless for obtaining a thermal image below a few hundred degrees Celsius, so for ordinary thermal imaging applications, other types of sensors are used, which then in addition are frequently (but not always) cooled below environmental temperature, depending on technology.

Confused? Most writers don't figure it out either. Most people don't even understand how incandescent color relates to temperature via Planck's law of black-body radiation.

Ever wondered why the pictures from your webcam has colors that are just slightly off? That's because your webcam uses a CCD sensor too, with a cheap IR-filter. The near-visible infrared light is distorting the colors. Some photographers go as far as filtering out all the visible light for taking beautiful IR photographs.

What this eventually all works out to is that many games and movies don't quite seem to know how their night vision goggles are supposed to work. Thermal effects and night vision are wildly mixed, confused, or combined into a single device: The background is shown in the glowing green of a starlight scope, with living things shown in false-color orange and yellow. Video games also commonly feature "night vision" in which living beings glow as though they were thermal hotspots and leave a trail of Fluorescent Footprints.

See Predator for the titular alien's mode of vision. Can't see through stuff, either. Compare Vein-o-Vision.