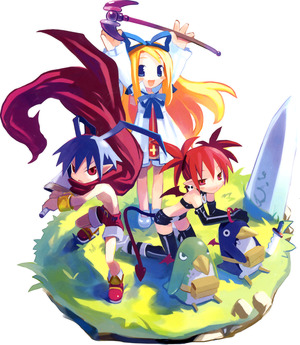 Disgaea is a series of Tactical RPG games created by Nippon Ichi (Atlus published the first game in America, since Nippon Ichi didn't have an American division at the time).

The storylines of the games are set in various Netherworlds, populated by demons and the souls of the dead (who serve as Prinnies until they can pay off their sins). Each game stars a primarily new cast, and is set in a different Netherworld, but guest appearances from the previous games are inevitable (and they can usually be recruited). The series' tone is FAR towards the silly side of the Sliding Scale of Silliness vs. Seriousness; expect loads of Lampshade Hanging, Genre Savviness, Shout Outs (enough to warrant their own page), and Parodies, all set in a World of Ham with No Fourth Wall.

All the games are highly regarded by Tactical RPG enthusiasts for their twisted humor and myriad ways to customize and level up characters and equipment. Oh, and the Prinnies are so cute too, dood!

The series appears to be the beginning of a new set of PC ports of Nippon Ichi's strategy titles, currently including Disgaea 1 and 2, and Phantom Brave.

There are currently six main games in the series, most of which have later received portable remakes:

And a few Spinoff titles:

Along with several adaptations into other media:

open/close all folders
General Tropes
Generic Class Tropes
Though the generic classes are not the focus of the games, they still have a backstory and are still an integral part of game play. This folder is dedicated to the classes and everything involving them and Worldbuilding.