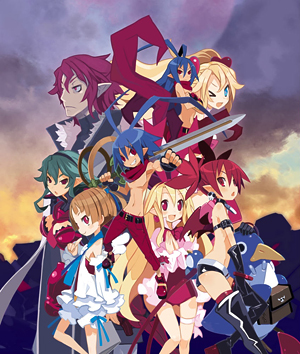 The Netherworld— darker than a pitch-black cave, deeper than the depths of the seas, a land where ominous demons run rampant.
In the past, this world was ruled by an Overlord with unrivaled charisma named Krichevskoy.
After this great Overlord passed away, many demons rose to become the next Overlord, plunging the Netherworld into an age of chaos.
It was then that one demon announced his claim to become the next Overlord.
That demon was Laharl, the only son of Overlord Krichevskoy.
He crushed every demon that stood in his way, and forced himself upon the title of Overlord.
He was helped by Angel Trainee Flonne, and after many twists and turns, the Netherworld and Celestia started interacting.
However, because she had harmed other angels, Angel Trainee Flonne became a Fallen Angel, and moved into the Overlord's Castle with Laharl.
A few years later—
—Opening Narration

Disgaea D(imension)2: A Brighter Darkness is a Turn-Based Strategy game for the PlayStation 3 developed by Nippon Ichi. It is the third game in Nippon's Ichi Anniversary Project and a direct sequel to Disgaea: Hour of Darkness.

Many years have passed since demonic Evil Overlord Laharl succeeded his father as Overlord of the Netherworld, but his reign is far from undisputed. There's the Krichevskoy Group, a political faction of demons who seek to install a Puppet King (a pedantic knight called Barbara) to the position. There's Sicily, an angel who claims to be Laharl's sister and (thus) a rightful heir to the throne as well. There's Xenolith, an introverted male demon who is certainly not up to anything suspicious. And worst of all, mysterious flowers are blooming across the Netherworld and slowly transforming the atmosphere into something reminiscent of Celestia.

With the aid of his closest allies/servants Etna and Flonne, Laharl must cement his Overlordship the way all true demons do: with gratuitous amounts of violence. Hilarity Ensues.

Disgaea Dimension 2 features the same high definition sprites featured in Disgaea 4: A Promise Unforgotten, a book as a new weapon type, a new Piggyback mechanic which allows monsters to become rideable mounts (Replaces Magichange from the previous games), a retooled Mentor mechanic that involves Relationship Values, and the return of Weapon Mastery from Disgaea: Hour of Darkness and Disgaea 2: Cursed Memories.

Game-Favored Gender: Girls get a huge leg up over guys in the Item World due to Succubus having an Evility which reflects a portion of damage dealt by male units. The problems here are that there is no way to shut this down and no Evility which has the same effect except against female units exists, so if you happen to like any of the male units better than their female counterparts, tough luck.