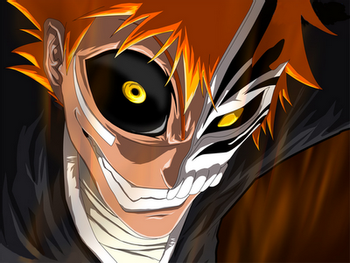 Some characters just need a way to show off how undeniably evil they are. Unfortunately, pure black eyes just seem too monochrome and don't allow said character to show off an extra spark of insanity. Cue the Black Eyes of Crazy. In these cases, the sclerae

(the whites of the eyes) are black, as are the pupils, but the irises themselves retain their colour, which can vary. Generally an indication that the character is not above going on a rabid, murderous rampage, and, as such, usually coincides with Ax-Crazy, though this rule is not absolute. It also heavily overlaps with Black Eyes of Evil, due to Ax-Crazy being a subtrope of Obviously Evil.

When seriously pissed off, he merges with one of his abominations - changing the colour of his sclerae to black.

When seriously pissed off, he merges with one of his abominations - changing the colour of his sclerae to black.