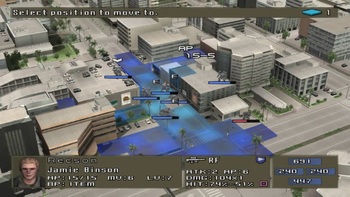 Turn-Based strategy games are a subgenre of strategy games which are generally wholly abstract, or a kind of military simulator. The players take command of a number of pieces or units, and then take turns manipulating them over a playing area usually marked with a rectangular or hexagonal grid. In each turn, player actions typically consist of some combination of moving a unit, attacking an enemy unit, or exploiting natural resources, most often by recruiting more units or building more fixed facilities. Typically, each unit can move, then undergo one other action per turn. Play typically concludes when some specific objective has been reached, especially the destruction of all enemy units (or all enemy structures,) though timed games are also common.

TBS games derive from traditional board games, tabletop wargames like Warhammer and BattleTech, and the miniature tabletop battles used by real generals and historians to practice and conduct actual wars for millennia. Many computer TBS titles use similar grid maps, hit and damage systems, and unit balance concepts to their earlier dice-and-paper equivalents. Recreational miniature wargaming is, however, Older Than They Think, with an early set of rules invented by H. G. Wells for tin soldiers in 1900! Many ancient boardgames, including Chess and Go, are predecessors of this genre, making it at least Older Than Feudalism, possibly Older Than Dirt.

Today, TBS has lost popularity to Real-Time Strategy, which is essentially the same style of play without the turn structure, its main advantage being the ability to handle larger number of players and units without increasing the duration of any given match. Nonetheless, some players still prefer the turn-based structure (even if only for single-player games) because of its greater allowance for long-term strategizing and precise execution. A huge difference between the style of play in a Real-Time Strategy is that you have to think on your feet as much as you have to think ahead. In a Turn-Based Strategy, more emphasis is on thinking ahead and taking time to plot your moves and consider other possibilities.

One compromise between TBS and RTS games is Pausable Realtime, although it's still impractical in multiplayer. Another compromise is Simultaneous Turn Resolution, aka "WEGO", in which players formulate and submit their orders for the turn at the same time, then all are resolved (executed) at the same time — this gives more or less Real-Time with Pause where pauses are fixed. Another compromise is Turn-Based Strategy, Real Time Combat, where strategic gameplay is turn-based, but tactical engagements take place in Real Time.

TBS games are also more common on handhelds than on set-tops. In fact, some normally realtime series have been converted to this genre for handheld installments. Turn based strategy stands up especially well to the limited computational muscle and controls of handhelds, not to mention that turns are suitable to spurts of frequently interrupted casual play.

The major variation between sub-genres in TBS is the scale of its action, which spans everything from squad-level individual combat (which, owing to the lack or greatly simplified resource management and production, is known as Turn-Based Tactics) through international conflicts all the way up to controlling whole worlds or galaxies. Larger-scale games often devolve from violent conflict into general competitive empire-building simulations with the possibility for non-violent victory, at which point they become so-called "4X" (eXplore, eXpand, eXploit, eXterminate) or “Grand Strategy” games.

For tropes common to all strategy genres as a whole, see Strategy Game Tropes.

Compare Strategy RPG, which is this genre crossed with the Eastern RPG.