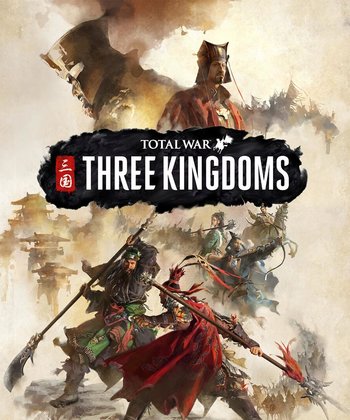 Total War: Three Kingdoms is an RTS game developed by Creative Assembly and published by Sega. It is the latest of the Total War series; set during the Three Kingdoms era. The era has been popularized in operas, folk stories, novels and in more recent times, films, television, and video games. The best known of these is Luo Guanzhong's Romance of the Three Kingdoms.

), and Emperor Ling had just died the previous year. China is in turmoil, as the Han Dynasty crumbles before the child-emperor, Liu Xie. He is but a figurehead; a mere puppet for the tyrant warlord Dong Zhuo. It is a brutal and oppressive regime, and as Dong Zhuo’s power grows, the empire slips further into the cauldron of anarchy. But hope yet blossoms.

Three heroes, sworn to brotherhood in the face of tyranny, rally support for the trials ahead. Scenting opportunity, warlords from China’s great families follow suit, forming a fragile coalition in a bid to challenge Dong Zhuo’s remorseless rule. Will they triumph against the tyrant, or will personal ambition shatter their already crumbling alliance and drive them to supremacy?

The crucible fizzes. Allegiances shift. The fires of conflict stoke opportunity. Only one thing is certain: the very future of China will be shaped by its champions. Total War: Three Kingdoms is the next major historical strategy game in the award-winning Total War series.

Listening to player feedback after the controversial shift in gameplay introduced by Total War: Warhammer and II, Three Kingdoms offers two modes that drastically alter the character of the game. In Romance Mode, Three Kingdoms takes on more aspects of Luo Guanzhong's story as well as Wuxia and heroic fantasy - generals are larger-than-life heroes who can cut through entire units on their own and unleash near-supernatural abilities to aid their soldiers and win the day. By contrast, Records Mode dials things back into a more grounded and historical experience reminiscent of the older Total War entries - generals and their bodyguards are still powerful battlefield assets, but you can't just run them through an army and hope for the best.

The game was released on May 23, 2019 for PC, with the Yellow Turban factions in the 190 CE start date as Pre-Order/Day One DLC.

In May 2021, Creative Assembly announced that it was done working on the game, and the game would no longer receive updates or Expansion Packs, with a currently unnamed sequel to the game already in pre-production.