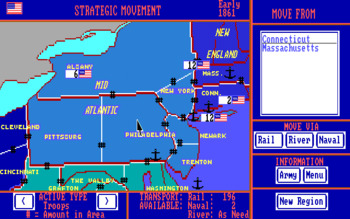 "No Greater Glory: The American Civil War" is a DOS Turn-Based Strategy designed by Edward Bever, who is known for his longtime collaboration with Sid Meier, and released in year 1991 by a company called "Strategic Simulations, Inc.".
Advertisement:

As the title suggests, it is a game centered around The American Civil War. In it, you assume the role of either Lincoln or Davis, and try to lead the Union or the Confederacy to victory in the civil war ... while also having to deal with things like cabinet choices, appointments and firings of generals who will lead your troops, and the usual problems that happens whenever politics is involved.

This game is currently Abandonware, and as such it can be freely and legally downloaded

(though DOSBox, or any other similar program, is required to run it).