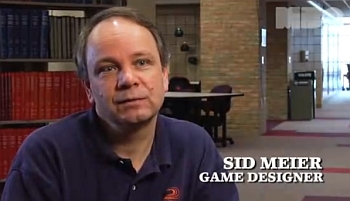 A game is a series of interesting choices.
Advertisement:

Sidney K. 'Sid' Meier (born February 24, 1954) is a world-famous Canadian game programmer and designer. His first game was inspired by arcade flight simulators; specifically, the ease with which he could exploit their pitiful A.I.s (with some help from a friend) pushed him to write a better one. He and his friend Bill Stealy went on to found MicroProse, and from there, the rest is history.

Meier is best known for two wildly popular game franchises: Civilization, the Trope Codifier for the 4X Turn-Based Strategy genre, and Railroad Tycoon, the Trope Codifier for the business management simulator genre. However, these are most definitely not the only games he is famous for, and chances are pretty good that any serious strategy or simulation gamer has at least one of his titles in his collection. Many of them include his name proudly displayed in the game's title. These include:

Note that, in addition to all of the above, he is also a mighty psionic XCOM Colonel.

Tropes Sid Meier's works tend to display as a whole include: