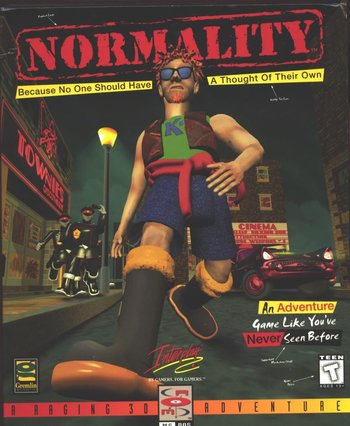 Normality is a 3D graphical adventure game, released in June 1996 by Gremlin Interactive. All cut-scenes in the game are pre-rendered. The game's engine was later used in the game Realms of the Haunting.
Advertisement:

The story revolves around Kent Knutson, a rebellious teenager in the city of Neutropolis, from which various places take up the setting of the game. Neutropolis is a dark and polluted police state in which any kind of fun is prohibited. When the game begins, Kent is just released after having been imprisoned by the "Norms", the city's police force, for whistling a happy tune while walking down the street. While in prison, he receives a note from an anonymous inmate telling him about the underground insurrection group that he might want to join.

After being released from jail, the player starts the game in Kent's apartment, having to go find and join this resistance group. After winning the trust of the resistance group Kent must assist them in overthrowing the dictator Paul who is responsible for the city's sorry state.