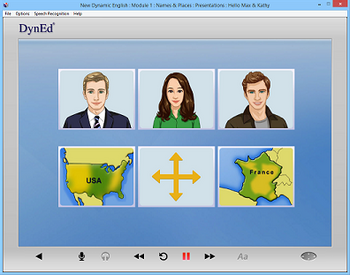 A screenshot featuring (from left to right) Max, Kathy, and Pierre.

New Dynamic English is a course, which is part of DynEd's Courseware (a portmanteau of "course" and "software"). Being more like a textbook, it is not technically included as a game. However, being an interactive course, it could almost be classified as an Edutainment Game. New Dynamic English is made in the United States, however only a few Americans actually recognize this program because it is targeted towards foreigners so that they could study English. New Dynamic English is one of DynEd's courses with a lot of stories (others include First English, Functioning in Business and The Lost Secret). It stars two main characters, Max and Kathy, though they only appear from Module 1 until 5, whereas New Dynamic English has 8 modules.

Like all DynEd courses, New Dynamic English has a scoring system based on recording, frequency of usage, and performing exercises. Users determine their starting module by taking the Placement Test, and will start based on the score. Later they can go to a higher module only after doing well on the Mastery Tests. Taking a Mastery Test itself requires going through presentations and exercises several times.