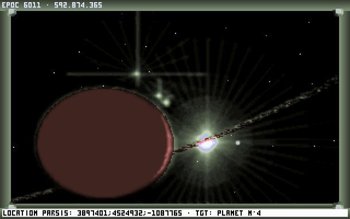 One of the many vistas from Noctis IV.
Noctis is an open-source space exploration game released in 2000. You play as a Felysian, a cat like sentient species in a Stardrifter, a speedy space ship. The gameplay is mainly exploring the reaches of the universe, and by that it means exploring a galaxy of over seventy billion stars. Aim at a point of light in the sky and you can visit it. There may be planets. They might have an atmosphere. It's possible they support flora, and some even have fauna. A few have structures from previous civilisations. Every part of it procedurally generated, by a program of just under a megabyte (for the first version), by solo developer Alessandro Ghignola.
Advertisement:

Noctis IV can be downloaded from the developer's very old site

, along with the older versions.

Shares a name with the road-tripping prince of Final Fantasy XV, but is obviously unrelated. Similar in spirit to No Man's Sky, more or less.