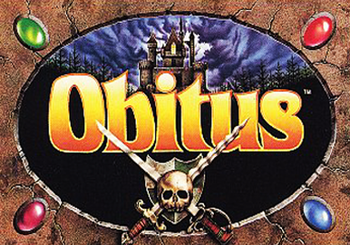 You are standing in a tall tower. Four heavy doors are set within the walls. A silver key lies on the cold stone floor.
Advertisement:

Obitus is a video game released in 1991 by the British publisher Psygnosis for IBM Personal Computer, Atari ST and Amiga. It is a combination of Point-and-Click Game, First-Person Shooter and Platform Game.

In a land that time remembered, Middlemere thrived under the rule of King Cirkassia but he was not a happy man. He craved an heir to his throne. The Warlock Domakk hated to see a thriving land and so he plotted to bring King Cirkassia's domain down. He promissed him a wife and heirs. Domakk kept his word and fashioned a romantic encounter for the king. Cirkassia became proud father of four sons but they hated one another. When the king passed away they began warring for possession of the land. Domakk smiled and left the land.One day a strange tower appeared in the centre of Middlemere. Dread of the machine spread over the land. But nothing happened. The four warlords visited the machine individually and each took a part of it. Now ruling became easier as their subjects were afraid of the machine and those who held a part of it had the power. The warring ceased and Middlemere was divided into four shires.

Centuries later, the history teacher Will Mason is driving home from his holiday in Snowdonia. While driving through Middlemere he falls asleep while driving and careers into the ditch. It is raining heavily in Middlemere and he can't repair his car alone; he seeks shelter in an old decaying tower and falls asleep. After waking up he find himself in the same tower - but it isn't anymore old and decaying. He traveled back in the past. The tower was a time machine.

Will Mason must find his way through the four shires of Middlemere to find all parts required to assemble the time machine. The ending implies that he isn't transported back to the present but maybe somewhere else. Maybe a sequel was planned.

Obitus consists of different sections, in witch you need to interact with the NPCs and objects. The transitions between the sections are bidirectional, so you can go back to places you have already been. There are three types of Sections:

The game consist of the four shires (Drakehurst, Burville, Blakestone and Cullen) each consisting of a forest, a dungeon and a castle. The shires are connected by the tower, which is located in the middle of the Map and has four doors each leading to the forest of a shire. Under the Land there is a big underground maze, populated by monsters, the Catacombs which have an exit to every shire. The mazes and castles are sometimes connected by roads.

The NPCs you encounter are friendly characters like partisans or dwarfes what have sometimes presents for you, the neutral and usually unfriendly Knights of the shires and some generic Mooks like archers or monsters.

The weapons are arrows, daggers, gunpowder and a magic weapon. Surprisingly the daggers are thrown and melee isn't possible.

Has nothing to do with a very similarly-named 2015 video game, Oblitus.