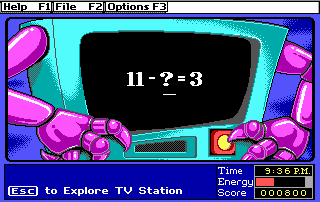 Video Games designed to educate as well as entertain, often, but not always, using the conceit of Alphabet Soup Cans. Edutainment games first started appearing in the early 80's, mainly on personal computers, giving rise to games like The Oregon Trail, Where in the World is Carmen Sandiego? and Math Blaster.

Edutainment games reached its peak in the mid 90's with the arrival of The ClueFinders, JumpStart, Living Books and the Humongous Entertainment games. The trend slowly petered out in the early-mid 00's, with companies who previously made a name for themselves making them (Davidson & Associates, Knowledge Adventure, MECC, The Learning Company, etc.) either going out of business or getting merged into a larger company.

Today, edutainment games are slowly but surely making a comeback, thanks to the advent of mobile apps and rereleases on sites like GOG and Steam. Edutainment games are typically thought of as being aimed at elementary-school-aged children, but there are also those targeted at older kids and even adults, especially in recent years. Modern edutainment games differ from their 1990s predecessors in a number of ways. In addition to being aimed at older players, they are more likely to focus on a single subject (often something relatively niche— say, prehistoric ecology or aerospace engineering) rather than covering a school curriculum. They are also less prone to using Alphabet Soup Cans, with the educational material instead being blended into the game's story.