Video Game / Where in America's Past Is Carmen Sandiego? 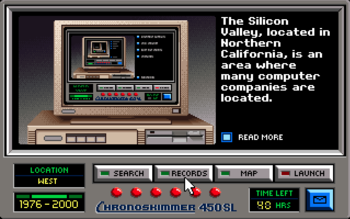 Well, this is meta.
Where in America's Past Is Carmen Sandiego? is an Edutainment Game released by Brøderbund Software in 1991.
Advertisement:

The game, of course, has you chasing Carmen and her gang through different places and times in U.S. history. You can visit five regions of the U.S. across nine time periods, giving you forty-five possible destinations. These nine time periods consist of the nineteenth and twentieth centuries divided into 25-year increments plus the pre-1801 era.