Video Game / Where in Space Is Carmen Sandiego? 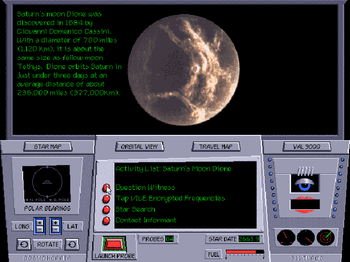 Well, she sneaks around the worlds from Io to Iapetus; she's a sticky-fingered filcher from Mercury down to Mimas; she'll take you for a ride on a slow rocket to Charon; tell me, where in space is Carmen Sandiego?
You thought Carmen Sandiego was done after she stole everything on this planet, but no, it turns out there's still the final frontier.
Advertisement:

Where in Space Is Carmen Sandiego? follows the same basic format as the earlier Carmen games, except now you chase V.I.L.E. villains across the nine planets and various moons of The Solar System. This time, Carmen's crooks are all aliens, so the warrants now ask you to specify the suspect's number of eyes and other such details.

While earlier Carmen products simply packaged a physical atlas or encyclopedia with the game for you to use as reference, this one has an in-game database, and chances are you're going to need it. No matter how much of an astronomy geek you are, you probably haven't memorized the names of all the craters on Enceladus. Subsequent Carmen games would retain the concept of having an in-game database.

Space was the last MS-DOS game in the Carmen Sandiego franchise. Starting with Carmen Sandiego: Junior Detective Edition, the series transitioned to CD-ROMs.