Video Game / The Wizard of Oz 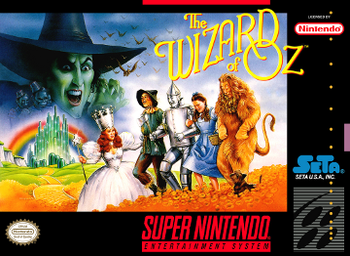 The Wizard Of Oz is a side-scrolling platform game on the Super Nintendo Entertainment System. It's based on the the 1939 movie of the same name. The game was developed by Manley & Associates and published by Seta.

The player first takes control of Dorothy as she treks through the land of Oz. Along the adventure other characters like the Scarecrow, The Tin Man, and the Lion will join her. Each of these characters have their own abilities and techniques. The player can switch between the characters by pressing the select button. Strategic switching between the characters to overcome challenges and obstacles is required in several spots in the game.

The game's structure is a linear adventure through several worlds in the land of Oz. Collecting bricks within the levels is required to build bridges between the regions in order to advance. Various enemies await Dorothy and her friends in the game, including the usual suspect, the Wicked Witch of the West, who will try to stop them.