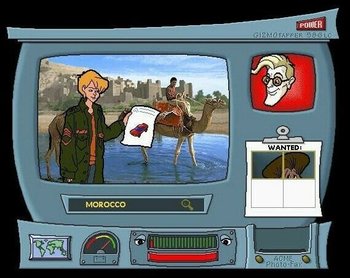 Carmen Sandiego: Junior Detective Edition is an Edutainment Game in the Carmen Sandiego franchise by Brøderbund Software. This is the only game in the series to feature the Where on Earth Is Carmen Sandiego? cast, namely Zack, Ivy, and the holographic Chief. It's also the first Carmen game of the post-MS-DOS era.
Advertisement:

As the title might suggest, this is a version of Where in the World Is Carmen Sandiego? aimed at a younger audience. The game's mechanics are adjusted to be entirely image-based, the assumption being that many of the kids playing this wouldn't have learned how to read yet. Additionally, the game is completed after solving only fourteen cases, and the graphics are brighter and more cartoony than in the regular Carmen games.