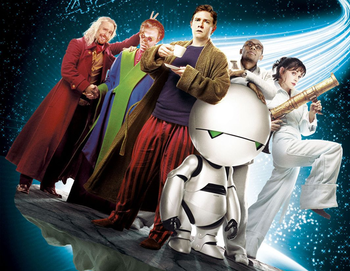 You know, the one that's made out of metal.
In The Team, one of the members is a robot, while others are humans (or other, more "organic" lifeforms). This robot might've been built by another member of the group, or the robot might've existed before they joined the team.
Advertisement:

As the lone robot, a number of "social" robot tropes may be in play: the members might treat it no differently from normal humans (or at least no differently from their more organic friends), especially if they're a Ridiculously Human Robot, though at least a few of them (usually the Jerkass of the group) might think of them as Just a Machine. On their end, depending on the robot's intelligence, they might either be just a silent, obedient member, someone who can speak, but only in a technical/intellectual manner, up to having full-fledged emotions that lets them interact with fellow members like a normal human would. If they are a Ridiculously Human Robot that looks human in appearance and/or being mistaken for human, There would be possibly a reveal of them being a robot if the other members don't know it already, either by the other members finding out for themselves, the sole robot getting a massive injury that could potentially be fatal to an average human, or probably through a Tomato in the Mirror moment.

Depending on their capabilities, the robot may pose as The Smart Guy, The Heart, or The Big Guy, or a Support Party Member. The robot is often the member to take damage more than other team members would, simply because they can potentially be repaired - at least when there is a good enough mechanic character around to help.

Compare to Robot Buddy whose traits may overlap with this, Forgot He Was a Robot, Robot Girl, and Ridiculously Human Robot. May overlap with Robotic Reveal. Contrast with Token Human.

Subtrope to Token Non-Human. It's distinction compared to a token robot, a token non-human's sense of cultural identity, family history, personal identity, personhood, and team dynamics, among other factors, is likely to be very different. The token non-human counts as a natural/organic being while the token robot is an artificial being.