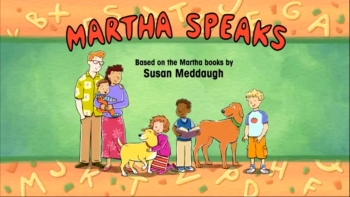 Martha Speaks is an animated educational series on PBS Kids adapted from a series of books of the same name by author Susan Meddaugh. Martha is an ordinary dog but, well, let's just let the show opening theme explain the premise:

Like all PBS Kids series, the show is educational. It focuses on mainly teaching preschoolers about synonyms and vocabulary in the English language, with each episode featuring an underlying theme illustrated with keywords. However, it occasionally puts some focus on introducing other learning concepts to kiddies, such as the Spanish language, history, and astronomy. But don't let the simplicity of the content fool you, the show has acquired a good-sized Periphery Demographic because of its writing, which is unsurprising given that a lot of the people on this series also worked on My Little Pony: Friendship Is Magic.

The book series contains examples of the following tropes: