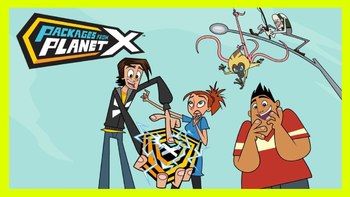 From outer space, mysterious packages meant for alien hands come to me — Dan Zembrowsky! And only I can open them! Sometimes they work, sometimes they hurt, but they always blow my mind!
—Opening Narration
Advertisement:

Packages from Planet X is an American-Canadian animated sci-fi comedy series created by American illustrator Jeff Harter that began airing in 2013 on Disney XD in the United States and later came to Canada in 2014 on Teletoon. Produced by American Greetings and DHX Media, it ran for a total of 26 episodes over a single season.

Dan Zembrosky is a charismatic 15-year-old from the Quirky Town of Iron Bay who suddenly receives strange and cryptic packages from an unknown alien planet. These packages come in various forms, ranging from mixers and underpants to weapons and far stranger forms of technology. Dan and his two best friends, Amanda Highborn and Troll Moko, use these alien gadgets to their own advantage, whether it be to make the soccer team, pass a test to avoid summer school or get out of trouble. However, with each small gain of abilities or coolness, there's generally a price to pay: An underwear that makes people very smart also overheats to the point where it detonates a school, and a cooking gizmo accidentally creates a meatball made of monsters. Regardless however, the trio must keep their mysterious contraptions out of the hands of Copernicus, an evil alien with the human guise of an elderly scientist who is plotting to use the different packages to take over the world. But they manage to muddle through somehow, and it's all smiles and one-liners at each episode's end.