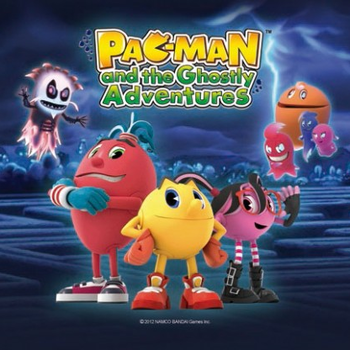 The Pac is back!
Advertisement:

Pac-Man and the Ghostly Adventures (known as Pac-World in Japan) is the second and latest animated adaptation of the Pac-Man franchise, featuring a teenage Pac-Man (whose design is loosely based off of Pac-Man Party) fighting evil ghosts trying to take over Pac-World. It aired in June 2013 on Disney XD.

for a new 3D cartoon show featuring a reimagining of Pac-Man. In this reality, Pac-Man is a high school student, but his world is definitely not going through mundanization. Indeed, he will have to face ghosts who plan to Take Over the World. In fact, the only ghosts who are his allies are none other than Blinky, Pinky, Inky, and Clyde. Aside from the conflict, Pac-Man's stories are told through slices of life, and he is ultimately a reluctant hero in a world of Magic Realism. A trailer can be viewed here!

The series could be seen on weekends on KidsClick until the block ended in 2019.

For the 1982 Hanna-Barbera cartoon, see Pac-Man. For the Licensed Game based on the series, see Pac-Man and the Ghostly Adventures.

Pac-Man and the Ghostly Adventures provides examples of the following tropes:

To his lament, Pac-Man's face becomes a viral hit.

To his lament, Pac-Man's face becomes a viral hit.