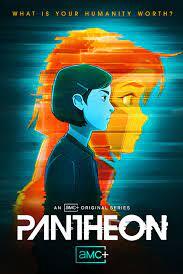 What is your humanity worth?
Pantheon is a 2022 Science Fiction Drama Animated Series produced for AMC, based on the short stories of author Ken Liu.
Advertisement:

Madison "Maddie" Kim is not a happy kid. Her father, brilliant programmer David Kim is presumed dead. Kim was a lead designer of the "UI" (Uploaded Intelligence) project for tech corporation Logorhythms, a brilliant advancement to scan human minds into the cloud and become more than human.

When David was stricken by illness, he volunteered as a test subject and was believed dead when the process went haywire. She faces intense abuse and bullying at school and hasn't any friends. One rainy day, she receives messages from a mysterious stranger who seems to be interested in helping her navigate her issues. This strange new friend soon launches digital vengeance against Maddie's bullies and Madison's mother Ellen is alarmed-especially when Maddie's "friend" begins communicating in ways only her late husband would.

Maddie soon hooks up via Chatroom with Caspian Keyes, a sullen yet intelligent teenager whose parents have been keeping secrets from him involving Logorhythms. Maddie suspects Logorhythms has faked her dad's death and is keeping him prisoner, and the two begin a small-scale investigation into the company. Meanwhile, idealistic engineer Vinod Chanda hopes to use the "U.I" technology to usher in utopia, but his employers have far more sinister plans and target him as the latest test subject.

A new kind of war is brewing, a battle for humanity between corporate ambition and the souls they victimize, and Maddie and Caspian are caught in the middle of it.