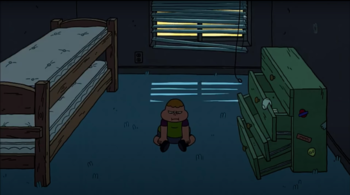 "It's a cozy little depression nest, and it serves its purpose well, which is to store the body of a depressed 23-year-old woman when she's not working, whilst the decor manages to accurately reflect her personality and emotional landscape."
— Psycholonials on Z.'s bedroom
Advertisement:

We all need a decent space to sleep and hang-out. It's a basic need – not only do we need to get a proper night's rest to function in the mornings, but we also need to feel safe, cared for, and happy. So what happens when someone's bedroom is cramped at best, and outright unlivable at worst? That means there's something bad going on, as they'd never choose to sleep in that setting willingly.

A character who is mistreated, struggling, or otherwise unfortunate will have a bedroom that reflects their situation. If they're kids, they'll usually be The Unfavorite or an outright victim of abuse, in which they live in a nice home, have a relatively wealthy family, and yet are stuck in the attic, basement, closet, etc. Even kids who are treated well might have their bedrooms suggest otherwise, though, if the problem is more subtle or complicated than just having mean parents. Occasionally, the room will be made bad by the person living in it, as a reflection of their mental state.

Expect these rooms to be small and cramped, perhaps impossible to decorate; in the worst case scenarios, the poor person may not even have an actual bed, sometimes not even an actual bedroom either, which is almost always a sign of seriously Abusive Parents. Sometimes, however, it's just that the room is built into a place that isn't designed to be lived in. Whatever the circumstances though, a character's awful or nonexistent bedroom is used as a visual or narrative shorhand to show how crummy their overall life is.

One key aspect here is that the character's sleeping space is abnormal for the house they live in. Be it a small apartment or a huge mansion, their bedroom or bedroom-equivalent stands out as being a particularly poor place to sleep. In this way, this trope relies heavily on comparison, as if there's anyone else living with them, those characters will have a much better sleeping situation. It's also relative: a character who lives in a shack is expected to have a cramped, hard-to-live-in bedroom, but a character who lives in a palace isn't. If their bedroom is below what someone would expect of their home, or they were otherwise forced to sleep somewhere much worse than everyone else does, it counts.

Compare Non-Residential Residence, in which a desperate character lives somewhere that's not intended for living. Certain examples may overlap. Also compare Horrible Housing, when a character lives somewhere to show how impoverished and desperate they are for shelter. Sister tropes include Empty Fridge, Empty Life, where a poorly-stocked fridge is used to show someone's life struggles in a similar way to this trope, and Soulless Bedroom, where somebody's bedroom looks wrong because it's too clean and sterile. Compare Mess of Woe, where a character's deteriorating mental state is represented by the amount of rubbish they have in their living area(s), and Poster-Gallery Bedroom, where decorations are used to indicate the character's personality. An Odd Place to Sleep differs in that the character chooses to sleep in an unconventional place despite having other options as a way of expressing their odd personality.