Film / This House Has People in It 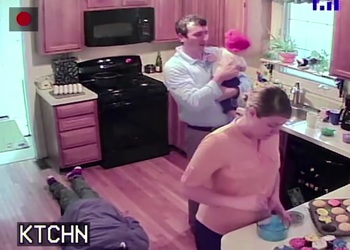 What a normal household it is.
LOG NOTES:
SUBJECT 3 PRONE IN KITCHEN FLOOR
Advertisement:

This House Has People In It is a 2016 short film written and directed by Alan Resnick and distributed by Adult Swim. Like other Adult Swim Infomercials such as Too Many Cooks, it was aired at 4 AM from March 15th to March 19th, followed by Resnick's earlier piece Unedited Footage of a Bear. Shot from a series of security cameras inside one family's home, what seems to be a simple bout of adolescent protest turns out to be something much more.

In addition to the original short

with some ARG elements as well as a homepage

This House Has Tropes in It: