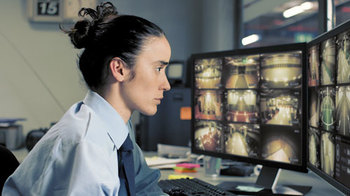 Timecode is a 2016 short film (15 minutes) from Spain, directed by Juanjo Giménez.

Diego and Luna are, respectively, the day shift and night shift guards at an underground parking garage. Their contact with each other never goes much past "hello" and "goodbye" and "how did it go?" at shift change.

One day, Luna gets a call from the boss reporting that a customer complained about a broken taillight. Luna goes to review the security camera footage, and finds that Diego accidentally kicked out the taillight of the car, while he was dancing. It seems that Diego is a talented dancer who likes to bust moves as he does his patrols around the parking garage. This discovery begins a whole new relationship between Diego and Luna.

No relation to the Mike Figgis 2000 feature film Timecode.