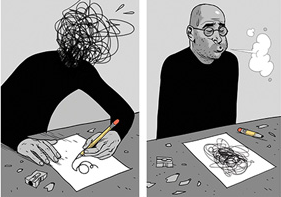 by Asaf Hanuka
Lisa: If you're feeling depressed, do what I do and write something. A novel, a play...
Bart: Or I could write something that's not gay.
— The Simpsons
Advertisement:

When a character uses art (such as painting, dancing, singing, crafting trinkets, etc.) as a coping mechanism to deal with extreme stress, such as trauma, loss, or isolation. This trope is a Truth in Television, as studies have shown that any kind of fiber art (knitting, crocheting, sewing, etc.) can reduce anxiety and depression. It is known as a form of sublimation

Captivity Harmonica is a situation- and mechanism-specific subtrope. Compare Cope by Pretending, where the character instead copes by pretending their stress is not as big as it is; Comfort Food and Heartbreak and Ice Cream, a.k.a. "Cope by Eating", and Cathartic Chores, a.k.a. "Cope by Working and Doing Chores". Contrast Percussive Therapy, a.k.a "Cope by Smashing". A Sad Clown is a character who copes by cracking jokes. See also True Art Is Angsty.

The inverse of this is Too Upset to Create, which can cause things like Writer's Block when a character's emotions leave them unable to create.