Film / Unedited Footage of a Bear 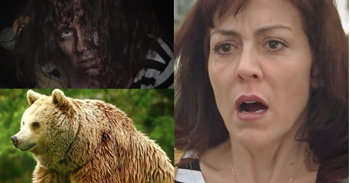 Take life in your hands!
Advertisement:

Unedited Footage of a Bear is a 2014 short created by Alan Resnick and Wham City Comedy that aired as an "infomercial" on Adult Swim. The short is exactly what you'd expect it to be...

...well, at first. The short does start with footage of a grizzly bear while the cameraman comments on the size of the bear's ears. However, the short interrupted by a commercial for a fictional drug called "Claridryl." Donna, the main protagonist, tells the audience about how much better her life is after she started taking the medication. As the short draws on, it quickly becomes clear that something is very wrong. What results is a downward spiral in to madness, anxiety, and much more.

Unedited Tropes of a Bear:

Claridryl- Take life in your hands!

Example of:
Side-Effects Include...

Claridryl- Take life in your hands!