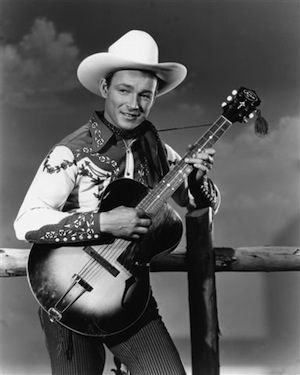 "Until we meet again, may the Good Lord take a liking to you."
Advertisement:

Roy Rogers (born Leonard Franklin Slye; November 5, 1911 – July 6, 1998) was a star of over a hundred "singing cowboy" movies, as well as a long-running series that began on radio and moved to television.

Generally accompanied by his Cool Horse Trigger, Canine Companion Bullet, gal Dale Evans (whom he married in real life), and one or both of his sidekicks, Pat Brady and Gabby Hayes.

He also has a fast food chain

named after him. Make of that what you will.

Tropes associated with Roy Rogers include:

References to Roy Rogers in other works: