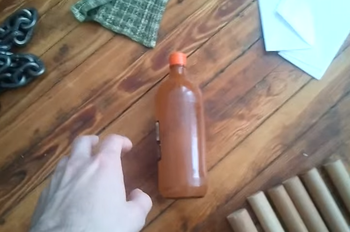 Hey YouTube!
"if your chair is on the floor, here is how to get it back and pick up all the pieces of something broken and unfair."
— Alan, "How to Pick Up a Blue Chair Off the Ground"
Advertisement:

alantutorial is a Psychological Surreal Horror/Surreal Humornote (at first) Web Video series about an ambiguously mentally-handicapped man named Alan who is seemingly obsessed with creating tutorials, and loves teaching his viewers how to accomplish various things. His tutorials vary wildly in topic, from things like creating paper airplanes, eating chips, and finding wood. As the series progresses, the viewer begins to realize that something is very wrong.

alantutorial is, in truth, an art project by Alan Resnick, who plays a fictionalized version of himself.

You can find alantutorial's tutorials here

, and you can watch each of them in (almost) order, starting from the first, here

Thanks for comin' to my tropes page!