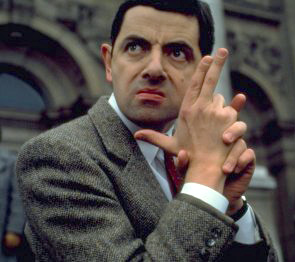 "I was arrested for the illegal possession of an imaginary gun. I don't know what all the fuss is about, it only fires imaginary bullets!"
"Hand over the cash, or I blow you away with this finger."
— Jeff Macnelly, from an illustration accompanying a Dave Barry column
Advertisement:

You've seen this before. A person imitates a gun with his hand. May be used for a Brandishment Bluff, when they pretend to have a real gun.

In an action series, a Friendly Sniper may help give the impression that the "gun" actually works. In more comedic series, the gun will actually fire something, resulting in a Finger Poke of Doom. A common target of Your Mime Makes It Real.

. Please, please do not confuse with "Fingerbang", regardless of what South Park tells you.

See also Giving Someone the Pointer Finger and Implied Death Threat (when used to suggest being shot later). Stuffing the finger in a gun is Finger in a Barrel. See also Hand Blast for cases where some actual superpowered or magical ability is used. Actual guns built into the fingers belong under Finger Firearms.

Bud gets a little too into playing cowboy and shoots out the TV with his finger.

Bud gets a little too into playing cowboy and shoots out the TV with his finger.